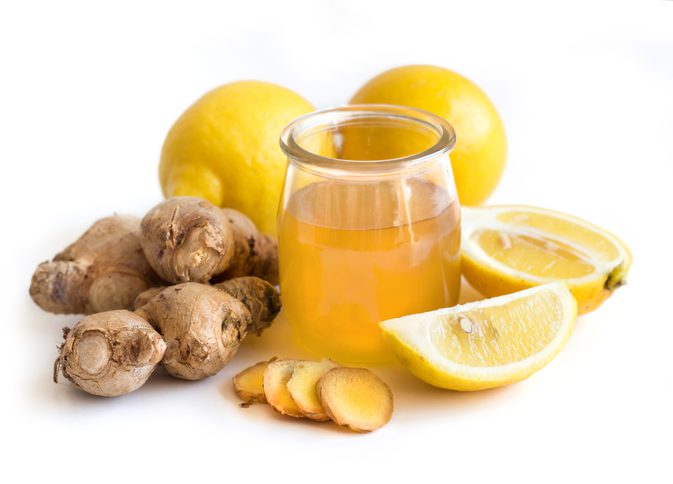 It may start as a little tickle in the throat, or a dull ache in the joints. Then a moment of dreadful realization hits – a cold is on its way! Whether you find yourself in the early warning stages, or a full-blown sinus infection, there is a natural remedy that can speed up recovery time and soothe a sore throat: fresh lemon, ginger root, and raw honey. Together, they form a potent (yet gentle) elixir for promoting wellness and fighting infection.

Lemon: Once used by sailors to battle scurvy, lemons are packed with the antioxidant vitamin C, which boosts the immune system, fights inflammation, and helps increase iron absorption, among other health benefits.

Raw honey: The bees know best! Raw honey is full of phyto-nutrients with antioxidant, anti-inflammatory, anti-viral, and anti-fungal properties. It also contains an enzyme called glucose oxidase, which breaks down glucose sugars and generates the antiseptic hydrogen peroxide; hospital-grade Manuka honey has even been known to assist in wound healing. Honey is also a pre-biotic, nourishing the “good” bacteria that live in the intestines. In addition, honey soothes the throat and helps suppress coughs. Honey alone can help calm a cold, and combined with fresh lemon and ginger creates an amazing tonic. Using raw honey is best as the enzymes remain more active, and locally produced honey is ideal as it helps the body acclimate to local pollens/allergens.

To create your own natural cold remedy, simply mince raw, organic ginger root finely and spoon into a bowl. Add a few spoonful’s of raw (ideally local) honey, enough to cover the ginger. Then squeeze fresh, organic lemon over top and mix the ingredients together for an even consistency. Take a tablespoon of this mixture orally once every few hours (as needed) and for maximum effect, chew the ginger in themixture, and allow the infused honey to rest against the sore part of the throat for a moment before swallowing. You can also add this remedy to hot water to create a soothing tea. It is recommended to consume this mixture within the same day.

** Note: this honey lemon ginger tincture is mild and safe for children as well as adults, but not for infants one year and younger. Raw honey can carry harmful bacteria such as clostridium botulinum, which is particularly dangerous for babies. Honey should never be given to an infant less than a year old.

Make sure to keep these ingredients on hand during flu season – you never know when you might need to zap a cold!